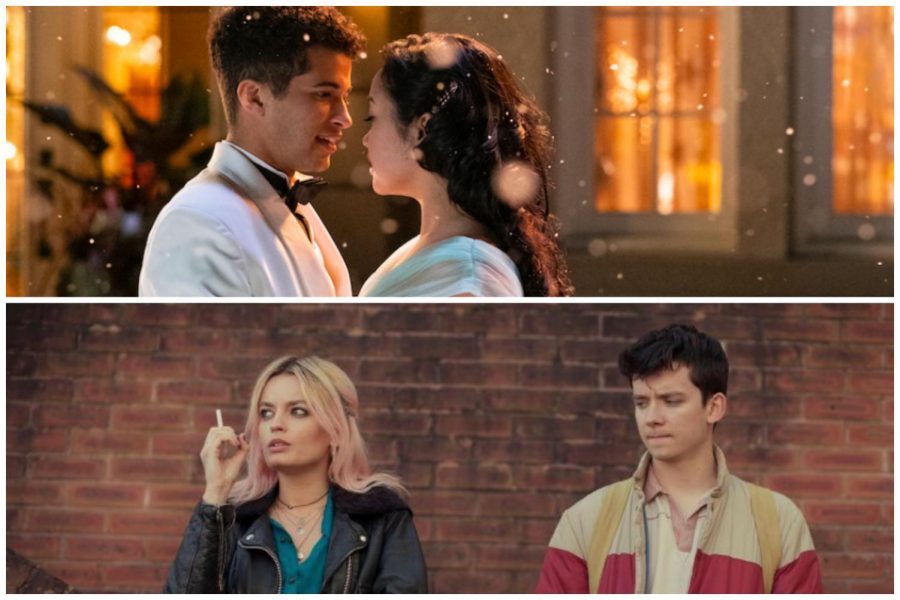 Photos courtesy of vox.com and rottentomatoes.com

February is coming to a close and that means the Season of Love is nearly behind us. That doesn’t mean we need to leave behind the romantic spirit, though! This month, we were met with plenty of new releases that were centered around love and relationships, ranging from totally adorable and relatable to hair-pullingly frustrating. What’s even better is that many of those releases came straight to Netflix for those of us who spent our Valentine’s Day at home. With that being said, let’s get straight into reviewing two of Netflix’s most popular February releases: Sex Education Season 2 and To All the Boys: P.S. I Still Love You. (And yes, there will be some spoilers).

Sex Education has been a critical and commercial success from day one, immediately becoming a hit among teenage and young-adult audiences for its honest and raw take on high school life and its aesthetic which is equal parts modern and retro. (The show-runners actually purposefully left the setting ambiguous in order for the story to fit into any time period – hence why characters sport 80s and 90s fashion but still use modern technology and why the school follows a British system with typical American features like prom and letterman jackets). With such a diverse and extensive cast, Sex Education is able to cover a wide range of topics from confronting one’s own sexuality to dysfunctional families to pregnancy and abortion. Each subject is approached with honesty, neither being made light of nor being too somber for the show. The second season, released in January 2020 (so not technically a February release…), does an even better job of introducing new issues and spreading previous themes out over several episodes. Take, for example, when Aimee is sexually assaulted on the bus in Episode 3. At first, she tries to brush it off, but it’s thanks to Maeve, who insists that she report it, that she begins to realize how serious an impact it had on her. It affects her relationship with her boyfriend and makes her afraid to ride the bus again, but it also allows her to get closer to the other girls in the cast as they share their own experiences with harassment. Creator of the show, Laurie Nunn, mentioned in a video with Netflix UK & Ireland that she used her own personal experiences as the basis for this arc of the show, making sure to consult professionals when addressing these issues. Every difficult topic included in the show is treated with care and presented in a healthy way rather than glamorizing or romanticizing it.

Beyond that, Sex Education is filled with a wonderfully developed cast of characters with unique backstories that reflect the complex reality of being a teenager. Our main characters aren’t just stereotypes – they’re all multifaceted in the way that every person is. For that, Sex Education certainly deserves praise.

On the sweeter end of the spectrum comes To All The Boys: P.S. I Still Love You, sequel to To All The Boys I’ve Loved Before, released in August 2018, and adaptation of the Jenny Han trilogy of the same name. The first film follows Lara Jean Covey, played by Lana Condor, a high school junior with a habit of writing love letters for each of her crushes before she locks them away in her closet. When her younger sister mails the letters out, Lara Jean finds herself confronted by two of the recipients: her sister’s boyfriend, Josh (Israel Broussard), and popular boy Peter Kavinsky (Noah Centineo). Soon enough, Lara Jean and Peter start fake-dating in order to throw Josh off her trail and to make Peter’s ex-girlfriend jealous, and the two eventually develop real feelings for each other. It hits a ton of the standard teen romance tropes: shy girl meets popular boy, mean and catty ex-girlfriend, love triangles, and fake-dating. Overall, the first film was met with a lot of positive feedback and became one of Netflix’s top releases of that summer due to its cute and classic story. The book series had already gained quite a fanbase, but, thanks to the movie, an entirely new audience was reached and the popularity of the series grew immensely.

So, when the sequel was announced to be released in February 2020, fans were thrilled! The sequel, To All The Boys: P.S. I Still Love You, picks up with Lara Jean and Peter now officially dating and navigating the obstacles of a relationship as Lara Jean encounters another one of the letter-recipients, John Ambrose McClaren (Jordan Fisher). Now, a new love triangle emerges as Lara Jean questions lingering feelings for John Ambrose. P.S. I Still Love You remains faithful to the first film’s quirky style, courtesy of Awesomeness Films’s talent, with a fun new soundtrack and a stellar cast. That being said, this sequel was a bit controversial among fans for a few reasons. The biggest issue fans seem to be having is with the titular love triangle between Peter, Lara Jean, and John Ambrose. The conflict between Peter and John Ambrose has become a modern “Team Edward vs. Team Jacob” debate as fans have argued over who was the better fit for Lara Jean. As silly as it may seem, the movie simply doesn’t set up Peter and Lara Jean’s relationship as one worthy of lasting when put up against John Ambrose and Lara Jean’s relationship. Lara Jean emphasizes that her crush on him was special, and he shows so many strong traits of a good partner, it’s hard to not believe in them as a couple. However, in the end, Lara Jean returns to Peter, much to the dismay of many fans. Along with this came awkward pacing and strange dialogue at some points of the film which, as funny as they may have been to laugh at, were distracting nonetheless. Still, the movie does succeed in adapting the second book in the trilogy and being a classic teen rom-com. At the end of its 102 minute run-time, it leaves you with the feeling that anyone can find love and make it through any romantic obstacles.

Sex Education and To All The Boys I’ve Loved Before are wildly different stories; Sex Education is raw in its portrayal of teenage relationships and behavior, showing the good, the bad, and the ugly, while To All The Boys I’ve Loved Before is a sweet and down-to-earth romantic fantasy. Yet, despite having very different takes on high school life, these two Netflix originals have somehow managed to hit very similar teenage demographics and become popular enough to receive continuations. So, even with completely different tones, themes, and styles to them, it’s safe to say that both series have done a good job of connecting with their teen audience whether that’s through touching on real world issues or appealing to the escapist in each of us.